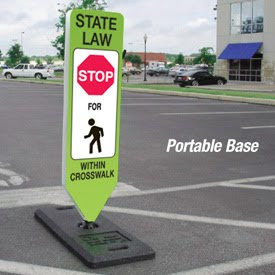 Re: NJ's New State Law Requiring Motorist to STOP while Pedestrians are in crosswalks

I'm writing you for your assistance in obtaining crosswalks at every intersection along Palisade Avenue. As the Back Bay NAG, Neighborhood Activist I've been letter writing, attended a town hall meeting and have had only four croswalks painted. I'm thankful for the four crosswalks, but I'm asking for additional so that residents who live along Palisade Avenue, County Road 27 can take advantage of the new State Law that went into effect April 1, 2010.

From Wikapedia, "An arterial road is a moderate or high-capacity road which is immediately below a highway level of service."

Sir, I don't know what else I can do to convince my elected Officials to paint these crosswalks. Palisade Avenue is a County Road, and normally home rule applies, giving the Borough of Cliffside Park the final say. I asked at the town meeting the only time this can be over-ridden is when it pertains to laws coming out of Trenton, those being State Laws and was told I was correct.

I ask your office to contact both Bergen County DPW and Cliffside Park DPW so that the two departments can accomplish this requests that gives residents/pedestrians rights and can feel safe when crossing this Palisade Avenue, a major artery.

I invite you to read my letters, the first was back in June, all letters can be found on our website under LETTERS.

Thank You for your attention to this matter.