Oxen Hill both Safer for Pedestrians and Motorists

Oxen Hill both safer for pedestrians and motorists 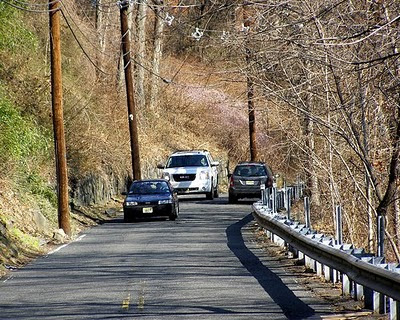 www.bipolarbear.us
Letter to the Editor of Bergen Record and NorthJersey.com


As a Community Activist since 1992 I have to weigh in on the article written by John Cichowski on November 14, 2010, titled Palisades up the down roadway.

Oxen Hill is one of three roads entering and exiting the Borough of Edgewater. Anyone growing up in the area has witnessed the transformation of small Borough into a much larger community that's roadways are snarled with traffic on weekends and the word is out that there exists another way up, that being Oxen Hill. My family moved to Cliffside Park in 1974 and I used Oxen Hill then and now and strongly agree with Mayor Calabrese that the roadway be used one way.

As a Community Activist and former columnist for America On-Line-Digital City Boston, known as the Neighborhood Guy, I know a good deal about safety both vehicular and pedestrian. We haven't seen the recent Census, but based on "the 2007 Census estimate for the borough had a population of 9,582" that number easily triples do to the high costs of home ownership and the rise of new families and roommates.

Let's not forget Edgewater is in the heart of New Jersey's Gold Coast and with that the malls, movie theater, eateries, restaurants, etc., draws folks from the communities who border the Gold Coast. Not only should Oxen Hill be made one way up as an emergency exit roadway, but the telephone poles should be painted white from the base up to six feet. A side walk the entire length to accommodate the pedestrians who work in all the stores, along with new fluorescent street lamps and possible a bike lane to accommodate the area cycling enthusiast.

Stephen A. Puibello, Founder
Friends and Neighbors of the
Back Bay NAG.
Neighborhood Action Group
Community Activist since 1996
web: www.Backbaynag.org
Posted by Stephen Puibello at 5:06 AM No comments: